Are You Fixing Problems or Solving Them?

October 30, 2019 By Peter Holtgreive No Comments 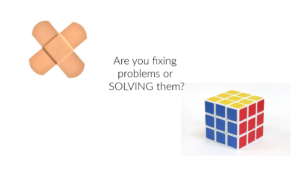 Have you ever been to Qdoba? It’s a casual dining restaurant featuring Mexican food. The other day I was there and watched a particular employee wipe down tables and chairs after diners left. He had a smile on his face as he did his work. That was until he got to the trashcan.

He wiped the area clean and looked into the trash bin opening and frowned, throwing his towel down. He fiercely opened the cabinet and pulled out the trash can and reached in, pulling out several silver trays – these trays are how the delicious Qdoba food is served.

He slammed the trashcan back into place, threw the dirty trays into his busboy dish tub and marched to the back. A few minutes later, he returned with a sign – handwritten in thick black marker the words, “Don’t Throw Away the Trays”.

How long do you think this solution lasted? I know for one, I personally didn’t throw my tray in the trash. But was it a complete solution? What else could be done to solve the problem, rather than just apply a temporary fix?

Fixing a problem is usually quite quick. Someone seems a problem and creates a knee jerk reaction to fix it. It takes into consideration a limited scope of information. In the above case, the busboy, while ambitious, used only his perspective to determine the problem and a fix. You likely know that Qdoba is a chain restaurant – did the busboy’s sign fix the problem of disposed trays at any other location? What was this problem causing other franchisors? Was this a problem worth solving?

Solving a problem, on the other hand, looks at the bigger picture to get to the root cause. It takes in more perspectives to find a long-term solution. In fact, when I meet with companies who have a big problem to solve, there is quite a large impact on their bottom line and just a fix won’t do.

Making it Hard to Fail

When we look at creating a solution, we look to create one that is mistake proof. We make the process SO easy, that it is hard to do wrong. We set people up for success. Lean isn’t the only process that does this though – think about some of the solutions you’ve seen in everyday life to help us, and others, not fail:

Solutions don’t need to be complicated, they just need to allow little to no room for error. Companies who think about processes and how to make them foolproof, rather than just letting them happen, are more successful.

Now, Back to Our Story

The above story about Qdoba is something I made up, but it paints an important picture. To solve the problem, they made the opening to the trash can too small for the silver trays to fit. They also placed a label on the shelf above the trash that clearly, and kindly requested that all silver trays be returned to that spot. This made it fool proof. If a patron tried to throw away a tray, it simply couldn’t be done. It would also trigger them to take another action, such as placing it on the clearly marked shelf, or, in the worst-case scenario, setting it back on the table where they ate. Either way, this which allowed the busboy to pick it the trays up, rather than dig through the trash for them. Problem solved!

PBEX, LLC provides a complete review and analysis of the business processes that create efficiency and profitability, and the barriers to them. Contact us today to learn more about lean business management and to schedule your review with a process improvement and automation expert and start solving problems, rather than just fixing them.